How to Choose the Right Laser Vision Positioning and Marking Machine? 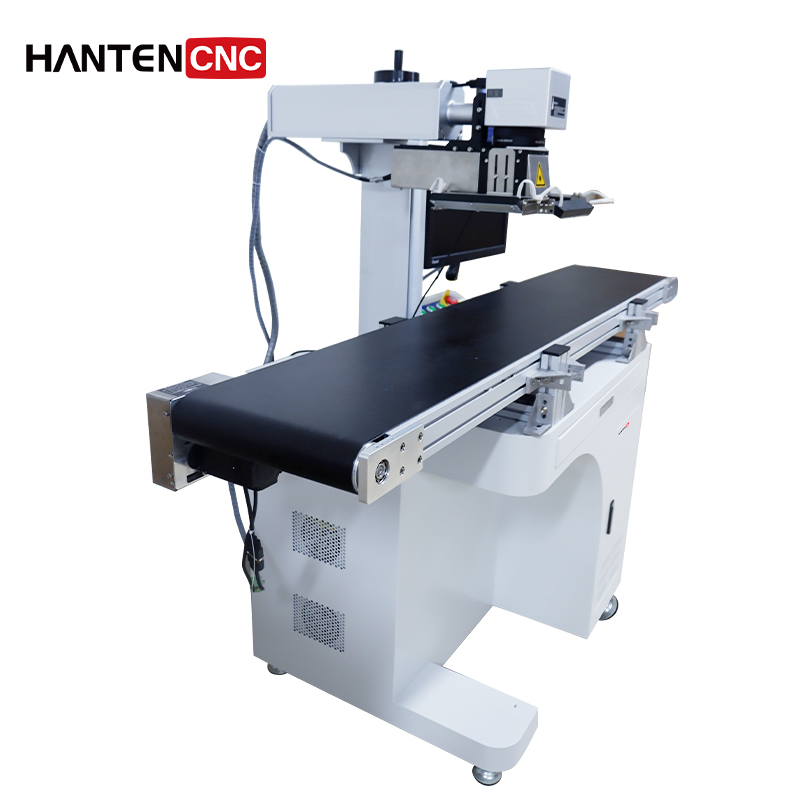 What is Vision Positioning Laser Marking?

First of all, we talk about visual positioning and marking. As the name implies, it requires the vision system and our laser marking system. The two systems communicate with each other through the network cable, and the positional relationship captured by the vision system is transmitted to the laser system through the network cable. , adjust the marking position, a process method to achieve accurate marking

Classification of mainstream visual systems on the market

True coaxial vision system, that is, the laser light path and the visual light path are on the same axis, we can see that the axis of the laser and the CCD camera are vertical, through a special lens, the laser is transmitted through, and the visible light is reflected to the vision system. The two kinds of light are on the same axis. Since the light has to pass through the field lens and the reflective lens of the galvanometer, and then reflect to the camera through the reflective lens, the camera's vision is relatively small, generally only 20-30MM, but Since the camera and the laser system are transmitted through the same optical path, the positioning accuracy is relatively much higher, and the accuracy can be 0.01-0.03MM. Of course, there are also some suppliers of true coaxial that can achieve arbitrary vision according to the field lens range. In theory, that is to control the laser galvanometer to deflect through the vision control card, which is slightly smaller than the field lens range relative to the field lens range. However, it is difficult to control and has high requirements for the software of positioning software companies, which are generally rare in the market.

The disadvantage of this method is that the camera's vision is small, and the laser intensity of the laser system is lost, that is, the laser power has a certain loss. The main application of true coaxial is the occasions where the precision is high, and the cost is not too limited.

Pseudo-coaxial vision positioning, from the meaning of the name, we can understand that the vision and the laser system are not coaxial in the true sense.The pseudo-coaxial optical path: the laser optical path and the visual optical path are coaxial after exiting the field mirror. The principle of pseudo-coaxial is that the CCD captures and calculates directly, controls the deflection of the galvanometer and marks it. Its characteristics are that the imaging effect of a single snapshot is good, and the field of view is large. According to the size of the eye of the field lens and the pixel of the camera, it can generally be within the range of 200MM. The smaller the range, the higher the positioning accuracy. Limited by the size of the reflector lens of the bracket, it can generally be 90*70MM 130*100MM and so on.

Pseudo-coaxial vision system is widely used in the industry due to its advantages of convenient installation, larger field of view, and lower cost than true coaxial. The positioning accuracy is related to the field of view. The smaller the field of view, the higher the accuracy; and vice versa. At present, the highest precision can be achieved ±0.02mm.

The Side-axis vision positioning laser marking machine is relatively easy to understand, that is, the CCD camera is installed next to the laser scanning head, and the optical path: the laser optical path is parallel to the visual optical path, so it has the least impact on the laser system. Its working principle is that the CCD directly captures and calculates The offset between the laser center and the camera center is obtained to achieve the purpose of visual positioning. Then the laser system moves horizontally or the table moves to complete the marking. The feature of this is that the range of vision positioning system is relatively large, and the selection of light sources is flexible, but the accuracy is relatively low, and it is greatly affected by the structure.

Mainly used for large-format marking and large-format cutting. You can use a single camera or multiple cameras to work collaboratively, grab the mark, and mark or cut by controlling the movement of the platform. If the camera and the vibrating lens are on the parallel line, the accuracy will be higher. However, due to different working scenarios, sometimes the camera needs to be shot obliquely. By calculating the compensation to achieve positioning, the accuracy coefficient will be relatively low.

Through the introduction of the above information, you can choose the appropriate visual positioning marking machine according to your company's products, marking accuracy and equipment budget. We welcome customers to send us samples for marking